Class Systems Under Alexander the Great

Alexander overthrew Darius III as king of Persia in 333 BC and, therefore, became king of Persia. Dominating almost every country in the known world, Alexander the Great lived up to his name and was the ultimate king- the conqueror of the time.  People lived their lives while he acquired country after country. Power struggles and class systems always seem to begin when a civilization starts to establish itself. It was already apparent when Alexander took the throne but was an important part of the people and society. Usually the establishment of a new group of people involves the break off from one civilization, resulting in the creation of another. “He had planned to create a ruling class by intermarriage of Macedonian and Persian nobles. He himself married foreign, Roxanne of Bacteria and later a Persian princess” (Marx).

There were two distinct groups within Persian society while Alexander ruled: the upper and lower classes. Although “Macedon was a male-dominated society, the queens and royal mothers were greatly respected” (Skelton & Dell, p. 80) 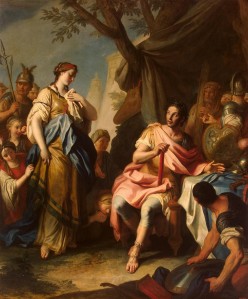 Alexander The Greate and Roxane

This respect was shown because they came from wealthy families and would be the ones to produce the next heir to the throne. Struggle for power occurred regularly between the queen, the king’s mother, and even his advisors.

The king, aristocracy, and religious priests made up the upper class. Most of the aristocracy within the upper class was in command of the army as generals or in the cavalry. Their preferred interests were “fighting, hunting, and heavy drinking. The king could only gain respect from the nobility if he was an expert in all these activities” (Skelton & Dell, p. 80). Alexander loved to hunt and ended up heading a huge army with an enormous camp of followers trailing behind him.

Alexander with the Spear

Although the spear is long gone, this statue shows the “conqueror” part in Alexander’s title. He was a true Macedonian and king of Persia. His love for fighting proved correct when he led his men into India and other countries ultimately conquering what was seen as the “world”.

The lower class lived very different lives from upper society. Most of these people were workers or laborers. “Freemen got paid and could choose where they worked. Bondsmen were serfs and slaves, and had little or no choice about where and for whom they worked” (Skelton & Dell, p. 80).

There was somewhat of a middle class also. “Hoplites are most often associated with Greek city-states and by-and-large represent these communities’ middle class. Typically these heavy infantrymen were to supply their own equipment, the round, three-foot in diameter shield, the seven-to-eight-foot stabbing spear, grieves, and breastplate, since the cities themselves were seldom wealthy enough to do so” (Anson 18). It seems that a lot of this middle class was made up of soldiers. Therefore, within the cities and society, there was a huge distinction between high and low class and somewhere in the middle were the soldiers.