The emperors of Rome had diverse and interesting histories, but one of the most interesting emperors during the fall of Rome was the emperor known as Julian the Apostate. His full name was Flavius Claudius Iulianus Augustus and he was emperor from 361 to 363. He was the son of Julius Constantius, who was half-brother to Constantine the Great. He was brought up by the eunuch Mardonius and the philosopher Nicocles. “Julian received a Christian training, but the recollection of the murder of his relatives sowed in him a bitter resentment against the authors of that massacre [of his kinsfolk], and he extended this hatred to Christians in general (newadvent).” He gained a deep interest in literature, philosophy, and paganism, though he also studied grammar and rhetoric. Constantius II moved Julian further and further away from the center of power as his education continued. “[He] was moved from Constantinople to Nicodemia by the emperor in AD 342… Soon after Julian was moved again, this time to a remote fortress at Macellum in Cappadocia, together with his half-brother Gallus (Roman-empire.net).” Julian remained at the fortress for six years until he returned to Constantinople but returned to Nicodemia in 351. That year, he also converted to pagan Neoplatonism and was initiated into theurgy by Maximus of Ephesus.

A statue of Julian dressed as a philosopher and wearing a crown.

Julian was presented to the army in November 355 as the next in line to the empire, was married to the emperor’s sister Helena, and then was sent to the city of Gaul. He was a gifted soldier.  His first order was to go to the Rhine and repel invasions by Franks and Alemanni. “Julian, though completely inexperience in military matters, successfully recovered Colonia Aggripina by AD 356, and in AD 357 defeated a vastly superior force of Alemanni near Argetorate (Strasbourg) (roman-empire.net).” During this time though, he was not totally successful. After his success in 356, he distributed his forces to protect multiple towns. He was left with insufficient forces to protect himself when Franks attacked the town and Julian was held captive for several months until his general Marcellus lifted the siege. In 358, Julian was victorious over the Salian Franks on the lower Rhine. The fourth year of his campaign was by far Julian’s most successful. In 360, the Sassanid Emperor invaded Mesopotamia and took Amida after a two month siege. Julian was order to send troops to his eastern army. “This provoked an insurrection by troops of the Petulantes, who proclaimed Julian emperor in Paris, and led to a very swift military campaign to secure or win the allegiance of others (newworld).” Constantius II’s troops captured Aquileia and besieged 23,000 loyal to Julian. “Civil war was avoided only by the death of Constantius II, who, in his last will, recognized Julian as his rightful successor (newworld).” This began Julian’s rule as emperor of Rome.

Though Julian did not become emperor until 361, he had a history in administration. “At the end of 357 Julian, with the prestige of his victory over the Alamanni to give him confidence, prevented a tax increase by the Gallic praetorian prefect Florentius and personally took charge of the province of Belgica Secunda (Wikipedia).” His views were highly influenced by his education and he and Florentius often clashed over how Gaul should be administered to. “On December 11, 361, he entered Constantinople as sole emperor and, despite his rejection of Christianity, his first political act was to preside over Constantius’ Christian burial, escorting the body to the Church of the Apostles, where it was placed alongside that of Constantine (Wikipedia).” As emperor, he simplified the life of the court and reduced expenses. He removed all eunuchs from office, reduced the number of servants and guards and began the Chalcedon tribunal where some follower of the old emperor were tortured and killed. He tried to model his reign after that of Marcus Aurelius. He was did not try to rule as an absolute autocrat and described the ideal ruler as ‘first among equals.’ He took an active part in the Senate and did not try to put himself above others, He expanded the authority of cities and tried to reduce direct imperial involvement in their affairs. “For example, city land owned by the imperial government was returned to the cities, city council members were compelled to resume civic authority, often against their will, and the tribute in gold by the cities called the aurum coronarium was made voluntary rather than a compulsory tax (Wikipedia).” Even though he did try to push for a less powerful imperial government, he did try and take more power for himself, much like other emperors of the time. 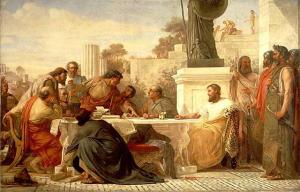 Julian at a conference of sectarians

The one people who were openly discriminated against during his reign were Christians. “Although as emperor he issued an edict of religious toleration, he did try unsuccessfully to restore paganism [.] (Columbia Electronic Encyclopedia).” He declared himself under the protection of Zeus and commanded towns to reopen pagan temples and perform animal sacrifice. “Julian issued a decree that all titles to lands, rights and immunities bestowed since the reign of Constantine upon the Galileans, as he contemptuously called the Christians, were abrogated, and that the moneys granted to the Church from the revenues of the State must be repaid (newadvent).” But even with his contempt for Christianity, he modeled his new paganism after the church, forming a similar hierarchy and calling for followers to mimic many of their virtues. His new pagan views did not last after his death though. “In 363, when Julian died, he was succeeded by Jovian, a Christian, at least nominally, instead of the obvious choice, Julian’s praetorian prefect, the moderate polytheist, Saturninius Secundus Salutius (ancienthistory).”

The image of Julian on a Roman coin.

Julian died in 363, during a campaign against the Sassanid Empire. He was trying to take back cities conquered during the rule of Constantius II. Julian was able to enter the territory of Armenia and was able to conquer several cities. “He arrived under the walls of the Sassanid capital, Ctesiphon, but even after defeating a super Sassanid army in front of the city (Battle of Ctesiphon), he could not take the Persian capital (newworld).” He decided to retreat back to Roman borders. On June 26, he died during a battle against the Sassanid army. He received a spear wound that is guessed to have injured his intestines and he died shortly after. Though he was a strong emperor during his reign, he left no real imprint on the Roman Empire or history. What he is remembered for most is his literary work, some of which survives to today.