For centuries, the Vikings were romanticized as being cold blooded killers, raping and pillaging their way up and down the European coast line, killing and destroying everything in their path. In some cases this may be true, but for the most part, the Norse as they were actually called, would go raiding as a means of gaining wealth and trade goods to supplement their lack of fertile farmland in the rocky north. (Simek)

Barbarity was seen all over Europe on greater scale than the Vikings ever did. For instance, in 782, Charlemagne, thought of as the Unifier of Europe, had 4,500 Saxons beheaded in a single day, due to his claim that they were oath breakers. (Shea) No Viking raid could ever match that amount of barbarity, especially in a single day.

In fact, the Vikings may even be due a second look when it comes to stimulating the trade economy that eventually saved Europe. (Winroth) After the Roman Empire collapsed around the 5th century, a large majority of trade and trade routes between Europe and Eurasia fell with it. The expansion of the Islamic Caliphate in the 7th century made this barrier even wider. (NMD) Even though a large majority of trade had picked up by the 9th and 10th centuries, it was mostly isolated to the kingdom of Charlemagne, and the main currency was gold and silver from primarily the Middle-East. Another main problem with trade, was in areas that gold and silver were seldom used, barter was the most popular form of trade, a form that greatly limits an economy. (Wintroth)

The Vikings unintentionally helped solve this imbalance of wealth and trade by doing two things. The first was by raiding monasteries, taking the gold and silver, and using it in the European trade routes to buy weapons and goods, as well as melting it down to mint coins for Scandinavian Chieftains in England and Ireland. The second was by using their extensive trade routes, stretching from Greenland to well passed the Caliphate, the Vikings brought more Central-Asian silver to Northern-Europe, by trading furs, raided goods, and a large amount of slaves. All of this greatly helped to balance the lopsided economy found in Europe at the time. (Winroth)

It is the raiding of the monasteries that we can most likely get our explanation as to why the Vikings had such a horrible reputation. The constant raids, sometimes year after year, on the people that basically had a monopoly on writing at the time, the monks, would explain why the Vikings were depicted as such barbarians. To add to this, the Vikings were Pagans, raiding Christians, so the monks writing records or even for aid would want to add to the description of the barbarity to portrait the Vikings as demons, hell bent on killing all Christians. Some of the only writings found from the Norse themselves, is found scattered throughout western Europe on Rune Stones. Many Swedish Rune Stones tell of expeditions from all over Europe, traveling not just to western but also eastern Europe. 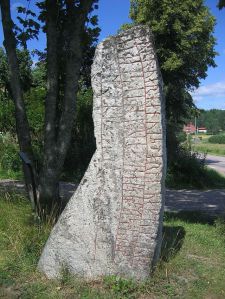 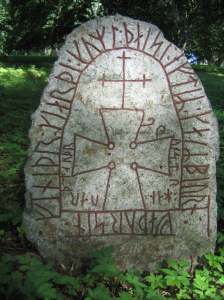 The Vikings did indeed raid, quite often. They would also try to find alternatives to fighting, negotiating for payment, instead of killing and taking it. In 991, before the Battle of Maldon in England, a messenger was sent out to the Saxon soldiers telling them they should pay tribute. After refusing to pay, the Saxon army was defeated. Tribute of 10,000 pounds of Roman silver was paid later that year by King Aethelred the Unready, to stop the raiding of the area. (Gordon)

Besides the promise of riches and pleasing the gods from raids, research has shown that some of the raids on Christian settlements and monasteries could be the result of retaliation. (Simek) It is no secret that some kingdoms would go to war to spread Christianity, seeing other religious groups like Pagans and Muslims as enemies. So naturally, there would be a blow back on them by the every ready entrepreneurs that the Vikings were, especially during times of weakened military presence in some areas of England. With close proximity to the sea and rivers, many English towns fell prey to the Viking raids. Without organized navies, many kingdoms on the western coast of Europe faced constant raids by Viking raiding parties that traveled freely doing as they pleased. (Hadley)

One thing that proves the Vikings were not just a band of barbaric savages, ravaging the coast line is their culture. Being some of the best sailors in the world, they traveled as far west as the Northern East Coast of North America, and there are records showing they made it as far east as Baghdad. (NG) They built some of the best ships of their time, and were highly skilled wood workers and carvers. Most of all they had a set social structure that seemed to span throughout the Norse world. 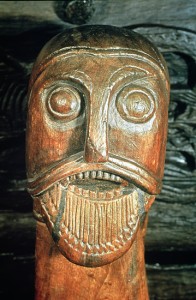 The first and lowest class of people were the Thralls. The Thralls were essentially the slaves, slavery was very important to Viking society, and were used for most manual labor, as well as servants. Despised and looked down upon, the Thralls were mostly people captured during raids, or were bred to produce more Thralls. The second class of people were the Karls. The Karls were free peasants that owned land, farms, cattle, and usually had a trade of some sort. The third class were the aristocracy of Viking culture known as the Jarls. The Jarls were wealthy, with many thralls, and owned large amounts of land where they lived in huge longhouses. Since the thralls took care of the chores, Jarls were in charge of politics, any administrative duties, hunting, and were the ones who mounted expeditions and raids. In some cases, when a Jarl died, some of his thralls would be sacrificially killed and buried next to him. Although there was a social structure in Norse society, like today there were some gray areas, where responsibilities would cross over between the Karls and the Jarls. (Kildah)

The Norse were in reality, no better or worse, when it comes to barbarity, as the rest of the world during their peak. They have been stuck with a negative stigma for centuries, simply because they attacked the people that wrote history as they saw fit.