Many wealthy Romans found the landscape and soil surrounding Mount Vesuvius remarkable. Pompeii, a lively city within the Roman Empire, lay southeast of Vesuvius and was fairly densely populated. 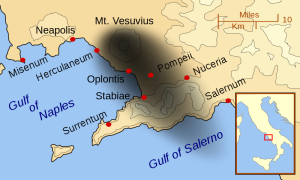 Somewhere around the neighborhood of twelve thousand people took up residence in the plentiful city. Although they knew that Mount Vesuvius was a volcano and not a mountain, they “thought it was extinct” (Moser & Gilman, p. 9). However, around midday on August 24th in AD 79, the volcano erupted. A column of debris, ash and smoke plumed upward and “reach[ed] a height of some 30 kilometers, making it visible for many miles around” (Moser & Gilman, p. 9). This stage of ash and debris was later called the Plinian Stage. “Ash and various sizes of rocks and pumice stones were ejected along with hot gases and water vapor at a rate of 1,200 kilometers an hour…” (Moser & Gilman, p. 9). 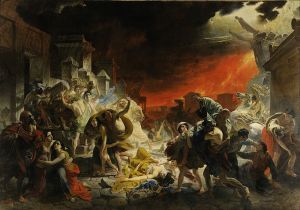 The Last Day of Pompeii

THE UNCOVERING OF POMPEII

Pompeii was found in the eighteenth century. A man by the name of Alcubierre found remains of a temple which he believed to be “the remains of Stabiae. It was not until 1763 that the excavators found inscriptions proving that these ruins belonged to the most famous of Vesuvius’ victims- Pompeii” (Stiebing, p. 150). Finding very minimal artifacts, Alcubierre and his group of men grew discouraged and returned to Herculaneum. However, he would not have done this if he would have known that the villas he had excavated lay on the far outskirts of the city.

He teamed up with a Swiss architect named Karl Weber who ended up finding a vast villa at the site of Herculaneum as well as many sculptures, paintings, and interesting ruins. This place was found because “in 1750 a peasant brought word that another well had uncovered an ancient pavement near the Augustinian Monastery” (Stiebing, p. 150). Inside what must have been a study, charcoal briquettes or logs were found. Most of these, once they were opened, were more philosophical works such as works of Philodemus and treatises by Epicurus. When Torre Annunziata (Pompeii) was finally understood to be the ancient city in 1763, all focus zoned in on the site. After all of the valuables had been taken, the uncovered portion was refilled with soil.

In 1860 Giuseppe Fiorelli was “appointed to be the director of excavations for Pompeii” and decided that the portions of the city that had been previously excavated and then refilled should be uncovered. From 1860 to today, excavations have focused on the streets of Pompeii and entering houses through the street level (Stiebing, p. 160). By digging this way, the city is getting fully uncovered one street block at a time.

POMPEII – THE DOOR TO ANCIENT HISTORY

These houses that were uncovered have been huge eye-openers towards the daily life of Pompeii’s ancient citizens. Whole villas have been uncovered and have shown how life worked back in 79 AD. I have heard that this eruption caught people so unawares what there is still food on the tables. This is great for us because we can know exactly what kind of food was consumed without having to make an educated guess based on plant or food residues. Each room that is excavated uncovers more of ancient life. 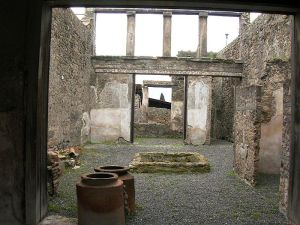 Before walking inside a villa’s street level doors, the first thing you would see was the shops. These “tabernas” were sometimes on the fascade of the homes. “Around eight hundred tabernae have been identified in the excavated area of Pompeii…” (Holleran, p. 112). Holleran also talks about how there were four different categories of shops- one being that the tabernae was “found in the front of atrium houses” (Holleran, 2012). 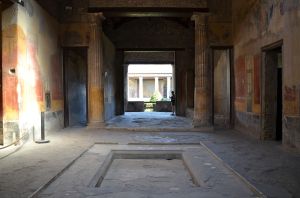 Atrium of the House of the Menander

The atrum is the first room you would see when you enter a villa’s doors. This place was mainly a “show-piece for visitors” (Foss & Dobbins, 2009) while a secondary atrium was probably used for more private meetings or family gatherings. “The atrium was normally covered by a roof which sloped inwards. The rain water ran down towards the centre…” (Connolly, 1990) where there was a hole to drip into a pool. This small pool was called the impluvium and is shown in the center of the atrium in the picture above. The atrium was surrounded by other rooms and was the center of receiving guests. 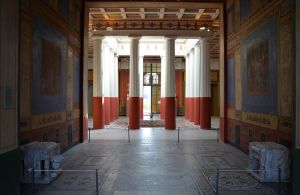 The Tablinium facing the Atrium, decorated in the 4th Pompeii style

Many people began to call on the wealthier people early in the morning. At six, they would all be ushered into the atrium and wait as each was called to be received by the master of the villa inside the tablinium. This small room “was at the back of the atrium… often completely open at the front divided from the atrium only by curtains or wooden screens” (Connolly, p. 34). Many times, if the room had wooden screens, there would still be big openings such as windows which opened up to the gardens on the other side. 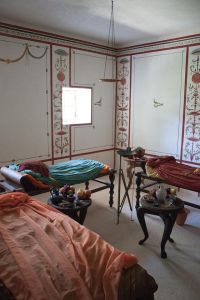 The triclinium was another important room. Otherwise known as the dining room, the triclinium was very different from what we associate to be a dining room. “Romans reclined on couches leaning on their left elbows and eating with their right hands. The arrangements of a Roman dining room was very formal. It consisted of three large sloping couches covered with cushions…” (Connolly, p. 38). It was these three couches that surrounded a table of food. Most times these dining rooms were used during the winter. During summer seasons, the Roman people would “dine in the garden or in a room opening onto the garden” (Connolly, p. 38). 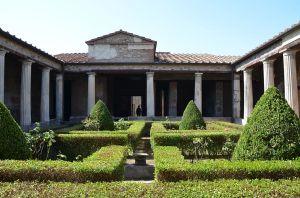 The peristyle of the House of Menander

The peristyle surrounded a garden. Rooms opened up to this area which shows that “If the traditional pattern was a group of rooms around an atrium court, with a golden plot behind, the colonnades of the peristyle initially serve to give luxury and magnificence to the garden plot” (Foss & Dobbins, p. 287). The oldest villas, or earliest style in Pompeii had this place towards the back of the house as basically an add-on when peristyles became popular. The Hellenistic style came about and became another atrium. This is because every room began to open up on the sides of the peristyle and gardens instead of the atrium within the villa. When this new style came about, they decided to put gardens inside the peristyle “instead of leaving it as a beaten clay court or paving it with cobblestones, cement, or mosaics…” (Jashemski & Meyer, p. 15) 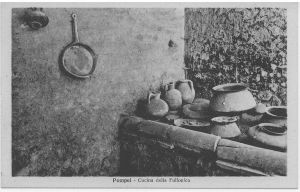 The Cucina rarely had more than a sink and a brick oven. Many pots have been found in the remains of Pompeii. This gives fascinating insight on the types of cookware Roman citizens had during that time period. One kitchen that was excavated showed that “Lunch was being prepared for the staff when the eruption came. The cook fled leaving a pot still on the boil. Other cooking utensils were found hanging on the wall or resting on the side of the oven ready to use… at [another] house in Herculaneum bread, salad, eggs, cake, and fruit were found on the table preserved by the sea of mud that engulfed the town” (Connolly, p. 36 & 38). 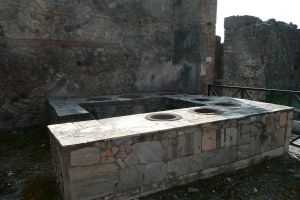 Another place where food could be found was outside in a thermopolium. This place was the “fast-food joint” of Pompeii. “The embedded vessels had hot or cold food. Many street corners had these, sort of like McDonald’s, and just as in big cities today, many people bought a lot of their meals there. A lot of homes didn’t even have kitchens” (Description of the thermopolim picture on Wikimedia Commons).

Holleran, C. (2012). Shopping in Ancient Rome: The Retail Trade in the Late Republic and the Principate. Oxford: Oxford University Press.

Moser, B., & Gilman, B. (2007). Ashen Sky: The Letters of Pliny the Younger on the Eruption of Vesuvius. Getty Publications.