Venus is a Roman goddess of love, beauty, sex, sexual seduction and fertility. She had a large role in the Roman religious festivals and myths. The increasing Hellenization of Roman upper classes identified her as the equivalent of the Greek goddess Aphrodite.

Venus was born in the sea and first came to shore at Cyprus, floating on a scallop shell. There was a Golden Apple with “For the Fairest” written on the side. Venus, Juno Minerva (She was the goddess of women and marriage) and Minerva (she was the goddess of wisdom) all wanted it. They decided to let a man, Paris, judge between them. They were all so beautiful that he couldn’t make his mind up. So Juno said she would make him powerful. Minerva said she would make him wise. Venus offered him Helen, the most beautiful woman in the world. He chose Venus, and Helen. Unfortunately Helen was married to someone else, and when Paris carried her off to his home at Troy, her husband came with his allies to get her back. Paris and all his family were killed and Troy was destroyed. One of the few Trojans to survive the Trojan War was Aeneas, the son of Venus. He went to Italy, and was the ancestor of the Romans.

As a native Italian deity, Venus had few myths of her own. Because of this she took over many of the myths of Aphrodite and became identified with various foreign goddesses. One of the biggest accomplishments of the goddess Venus, was having a planet named after her. The planet was at first the star of the Babylonian goddess Ishtar and then of Aphrodite. Because of her association with love and with feminine beauty, the goddess Venus has been a favorite subject in art since ancient times; notable representations include the statue known as the “Venus de Milo” (c. 150 BC) (ABOVE) and the painting “The Birth of Venus” (BELOW) by Sandro Botticelli. 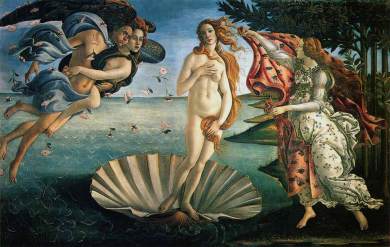 "The Birth of Venus" E.H. Gombrich, "The Story of Art"

4 responses to “The Roman Goddess Venus”