Written language is one of the major factors that made different cultures into the first major civilizations. Examples of these first written languages include the ancient Egyptian hieroglyphs and the language of the ancient Mycenaeans, commonly known as Linear B. These writing systems allowed for information to be recorded and passed between people in the culture, communication, and for decoration of religious buildings and monuments. Though some of these scripts survived to become the ancestors of our modern written languages while others did not, they all give us into the historical lives of those who lived in these two cultures.

In Ancient Egypt, the most common written language was hieroglyphic script. It is dated to about 3500 years before Christ, at the beginning of pharaonic civilization, and is made up of around 500 symbols. “Hieroglyphs were called, by the Egyptians, ‘the words of God’ and were mainly used by the priests.” (Egyptian Hieroglyphic Alphabet) Most texts were written on papyrus, “a type of paper… which was made from the river plant of the same name. Papyrus was a very strong and durable paper-like material that was used in Egypt for over 3000 years.” (Penn Museum) Hieroglyphs also appeared on tombs, temple walls, and monuments as works of art. Hieroglyphs were used as either ideograms, made to represent ideas through pictures, or as phonograms that were given phonetic value.  The Egyptians also had two cursive forms of hieroglyphic writing called hieratic and demotic hieroglyphs.  They had very similar purposes but were used at different times during the Egyptian period. These written forms of language could be read from either direction, dependent on the direction of human and animal figures. The one exception is hieratic, which was always read right to left. In the First century AD, the Coptic language, a modified Greek alphabet with some demotic symbols, began to be used. By the Fourth century, Coptic had become the dominant writing form and formal hieroglyphs were used in only a ceremonial role. In 1789, the Rosetta Stone was found, a stone carved with the same text written in Egyptian and Greek, using hieroglyphic, demotic, and Greek writing forms. This allowed some Egyptian texts to be deciphered and give a better view into Ancient Egyptian history. 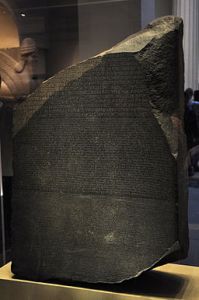 of Greek and Egyptian writing.

The Mycenaeans used a very different language called Linear B, “the oldest preserved form of written Greek that we know of.” (Violatti)  Linear B was first attested on Crete and have been found in mainland Greece, suggesting that the writing form was used between 1500 and 1100 BCE, depending on sources. Inscriptions found on clay tablets in major palace sites in Crete, Pylos, and Mycenae itself. Most of the texts found are inventories, palace administrations, and some military activity. They also dealt with religious offerings, such as food and wine, and the gods and goddess they were for.  There are no surviving narratives, myths, or poetry. The oldest of these tablets are the Room of the Chariot Tablets from Knossos, dated to 1450-1350 BCE (Wikipedia). Linear B writing consists of about 200 syllabic signs and logograms, characters that represent a word of phrase. It was initially derived from Linear A, a Minoan language that has not been deciphered yet, being mixed with Greek. Linear B is written in such a way that deciphering the pronunciation of words is difficult, especially where the meaning of a word is unclear from context of has no dialectic descendants. “Linear B cannot represent consonant clusters… the limitations of the script to represent Greek are fairly clear.” (Violatti)  “This system was apparently designed for a non-Greek language as it did not fit the sounds of Greek very well. In fact, it is likely that Linear A was used to write the pre-Greek language of Crete, and the incoming Greeks adopted this writing system for their own use, but without changing how the system fundamentally works.” (Linear B) When the Mycenaean civilization collapsed, Linear B gradually disappeared and literacy was lost until the Greek alphabet emerged in the 8th century BCE.

A Clay Tablet from Pylos, an example of Linear B writing

Both of these written languages emerged, developed, and collapsed in similar ways. They were used for common functions and help historians today figure out the culture and history of these ancient civilizations today. Though these written languages are not used they still have great influence on how history is interpreted and how we see the people of ancient Egypt and the Mycenaeans.

“NAMA Linear B tablet of Pylos” by Sharon Mollerus – originally posted to Flickr as How Cool Is Writing?. Licensed under CC BY 2.0 via Wikimedia Commons –