Imhotep: One of the most influential physicians in Ancient Egypt

Doctors have been essential in society for centuries upon centuries. Whether or not they were knowledgeable in medicine and on the subject of the body through modern contraptions, or saw illness as the requirement for spiritual purification, physicians have been looked upon as crucial healers within the public eye.

“Imhotep, the vizer and physician of King Zoser.”

One very important historical physician, Imhotep, lived during the Pyramid Age in ancient Egypt (Worrall, 504). Before this genius, physicians tended to lean towards the spiritual or magical. 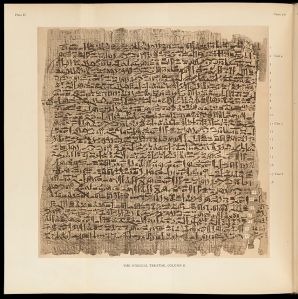 However, Imhotep “was the author of a medical treatise remarkable for being devoid of magical thinking: the so-called Edwin Smith papyrus containing anatomical observations, ailments, and cures” (Wikipedia). Many of the ailments on the papyrus included:

After him, many other Egyptian physicians “examined [their] patient by inspection, palpitation, and smell (Worrall, 504). There are several statues depicting this man, who eventually became known as a god in Egypt. The one shown resides in the Louvre Museum. However, this statue is one out of three that have the same pose. 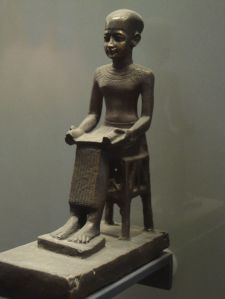 One of the other statues identical to this one that is pictured dwells in the Princeton Art Museum. This allows visitors to come and observe what this amazing man may have looked like. It is interesting to note that several figures depicting Imhotep are dressed in the same type of attire which includes a tight cap, a wide collar which was set upon the shoulders and along the chest, and a pleated skirt almost reaching his ankles (Turnure, 25-26). This may, in fact, be an excellent example of how important men in the ancient time periods of Egypt dressed.