After Alexander the Great conquered Egypt in 331 BCE he influenced the set up a university in Egyptian Alexandria called the museum. As a result of this, “a great center of learning grew up here which was to have much influence for several centuries to come” (Wise, 623). One of the main things that Alexandria was famous for was scientific knowledge (Mathisen, 276). Greek scientific discoveries in math and astronomy would influence how science was viewed not only theoretically but in the practical use of science as well. Prior to this, one of the first people to transform the traditional idea of Greek science as being, “based on imaginative hypothesis and convincing argumentation” to observation based on the natural world and experimentation was Aristotle (Mathisen, 274).

Aristotle called this observation of the natural world natural philosophy and, “considered [such fields as] biology, zoology, astronomy, and chemistry” to be natural sciences (Mathisen, 275). The scientific ideas of Aristotle obviously had a profound effect on Alexander the Great because in 343 Philip II of Macedonia had had Aristotle called to his court to tutor his son Alexander (McClellan and Dorn, 71). The scientific study under Aristotle caused a desire in Alexander the Great to spread Greek Scientific thought and  consequently Ptolemy I opened the museum as part of his, “policy in spreading the Greek culture and making scientific conquest” (Wise, 623). However, this thirst for scientific study would continue in Egyptian Alexandria even after the death of Alexander the Great in 323 BCE  with several Hellenistic scientists who made great scientific discoveries (Wise, 623). One such individual in the field of mathematics was Archimedes.

Archimedes was educated in Alexandria and developed such concepts as the value of pi, “the method for calculating the area of sphere,” and “the law of hydrostatics.”  He also excelled in showing the physical application of  principles of mathematics. Another one of Archimedes’ great accomplishments is making machines of war, “but he did not make record of them possibly due somewhat to the general adversity of the Greek mind to the practical application of science.” (Wise, 624). This shows that even though practical application of science was already available the scientific community was not accepting of this practical application and as a result many scientists hid their inventions so as not to be ridiculed by their scientific peers. Greek scientists therefore valued pure scientific theory over unreasoned technological development. Hellenistic Greek scientists also valued traditional scientific thought over novel ideas that challenged preconsisting notions. An example of this occurred within the realm of astronomy with the idea of heliocentrism.

“Aristarchus of Samos” came up with the concept of heliocentrism (Witty,105). This concept of claiming that the sun was the center of the universe and that the earth revolved around the sun was rejected by the wider scientific community. The theory that that the scientific community held instead was that of Greek astronomer Hipparchus who proposed, “the universe with the earth at the center…. [and] that the planets move in a circle at the end of an imaginary spoke which itself rotated around the earth” (Wise, 624). Hipparchus’ theory was so pervasive that it lasted throughout the rest of ancient Greece, “in[to] the middle ages and early modern times” (Witty, 105).  However, In the end, even though Aristotle and Alexander the Great had started the world onto the path of observational science and the beginnings of revolutionary ideas through practical applied science, the scientific community was not ready for these ideas at the time. The Hellenistic Greeks did however leave the world as lasting legacy for what would modernly be seen as the beginning of formal scientific thought.

Head of Alexander the Great

Alexander the Great was greatly influenced by Aristotle and Scientific Greek Hellenistic thought. 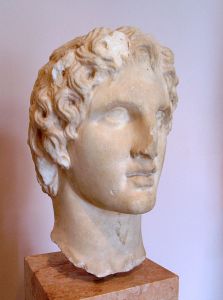 Aristotle is the philosopher and scientist that used the term natural philosophy to describe the natural world. 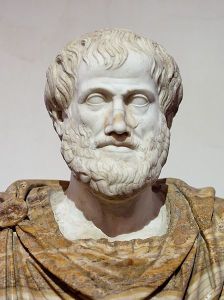 Roman copy after a Greek bronze original by Lysippos. Bust of Aristotle. 330 BC. Marble, the alabaster mantel is a modern addition. National Museum, Rome.Wikimedia Commons, the free media repository. Uploaded by Jastrow. Web.https://commons.wikimedia.org/wiki/File:Aristotle_Altemps_Inv8575.jpg

Roman copy after a Greek bronze original by Lysippos. Bust of Aristotle. 330 BC. Marble, the alabaster mantel is a modern addition. National Museum, Rome.Wikimedia Commons, the free media repository. Uploaded by Jastrow. Web.https://commons.wikimedia.org/wiki/File:Aristotle_Altemps_Inv8575.jpg