Pliny the Younger wrote this now famous quote as Pliny the Elder commanded his ships to sail closer to the flaming Pompeii. Fortune was one of the more popular Roman goddesses, and her favor was sought by many. Fortune is the Roman goddess of luck and chance, creating Rome’s abundance and fertility, as well as the downfall of Rome’s enemies.

According to “Personifications of Eudaimonia, Felicitas and Fortuna in Greek and Roman Art,” by Marina Prusac (2011), gaining the favor of the goddess of Fortune meant a good and happy life. Fortune was responsible for the many things that created a happy life; a fertile marriage brought a happy home and good health, prosperity of the State created wealth and a strong economy. 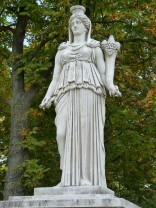 She is always depicted with a cornucopia, the horn of plenty, but she was very fickle with her bounty. Fortune’s favor could make or break an Empire; enemies fell before her curses and allies grew strong under her blessings. Emperors claimed her acceptance when they rose to power and lamented her disapproval just before their fall from grace.

According to “Reversed Epiphanies: Roman Emperors Deserted by Gods,” by Olivier Hekster (2009), the Roman Emperor Galba attributes Fortune to his ascension, not himself. Galba declared Fortune had come to him a dream, declaring “that she was tired of standing before his door—and that unless she were quickly admitted, she would fall prey to the first comer.”

Just as Galba had to invite Fortune in, he also had to make an error of sacrifices to lose her favor and therefore the prosperity of Rome. Fortune was a very jealous goddess. Galba mistakenly offered a necklace to the goddess Venus, an offering that was originally meant for Fortuna.

“The next night Fortuna appeared to him in a dream, complaining of being robbed of the gift intended for her and threatening in her turn to take away what she had bestowed” (Hekster, 2009).

Roman Emperors often minted coins with Fortune’s image to show favor with the Goddess of Abundance and Prosperity.

Galba had fallen from grace, and would be killed shortly after. It was important for the Romans to show that the Goddess had not failed in protecting her favored one, but that, instead, Galba had fallen from her favor. Pliny the Elder shouted for Fortune’s favor on the waves towards Pompeii, but she did not oblige him. Instead, he died on those waves and, like Galba, fell in Fortune’s absence.

Prusac, Marina. “Personifications of Eudaimonia, Felicitas and Fortuna in Greek and Roman Art.” Symbolae Osloenses, no. 85 (2011): 74-94.