Gladiators: A Day at the Games 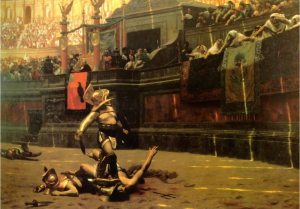 Afternoon Gladiator Battles. Gladiator looking up at the audience for their approval to kill or let the wounded Gladiator live. Photo courtesy of http://www.infosources.org/what_is/Gladiator.html

When we think of games today, we usually think of sporting events and the Olympic Games.  In Ancient Rome in the year of 264 B.C.E. the first know gladiatorial games took place.  It was part of the funeral (munera) of Decimus Brutus Pera.  The games would last about 100 days and used about 9,000 beasts and hundreds of gladiators.  A typical day at the games would consist of three parts.  A morning hunt, the lunchtime executions, and finally the afternoon gladiator battles.  At the break of dawn the Roman soldiers would wake up the gladiators and slaves and get them ready to fight for the day.  This involved stretching and practice fighting with wooden swords.  The audience would start to arrive and fill the amphitheatre by the thousands by walking up steep staircases through the walkways known as the ambulacra.  People would come from all over to watch the games.
The morning hunts began with the Romans capturing hundreds of animals and dragging them to the amphitheatre to die.  The crowd was always ready to see the capture of some new and exotic beasts fight to the death.  The morning hunt would start off with a bear going up against a bull.  The crowd would cheer and the gates would rise up and the two animals would fight until one animal was dead.  The first bloodshed of the day drew screams and applause from the crowd.  When one of the animals died the crowd would cheer and then fifty venatores would enter the arena.

The Morning Hunt. Slaves fighting against various kinds of beasts til the death. Afternoon Gladiator Battles on the bottom. Photo courtesy of http://www.mmdtkw.org/ALRIAncRomUnit7Slides.html

The next battle was slaves against various kinds of beasts.  The slaves would have a variety of weapons for their protection.  Animals that were used in this battle would cosist of elephants, rhinoceroses, lions, tigers, panthers,gazelles, deer, bulls, and bears.  The slaves would then be given dogs that would help them battle the other animals.  Even with all this going on the audience would place bets on which slaves and animals would make it through the fight.  When the last of the slaves survived other slaves would come out and carry the dead humans and animals away.
The lunchtime executions was the next event.  This event some stayed for but others they would leave the amphitheatre and eat lunch.  During this time criminals would be executed by means of animals or human executioners.  The criminals were usually charged with murder, arson, and armed robbery.  The audience was pleased to have this part of the games to get rid of the criminals in the cities.
The last event would be in the afternoon.  This would involve all the gladiators.  This was the high point of the day for the audience.  The gladiators would enter the arena through the great arch wearing their colored costumes.  The crowd would be going crazy and cheering for their own gladiator that they wanted to win.  When the gladiators made their way to the Emperor’s box the first thing they did before the battles started was the drawing of the lots.  This was done to see which gladiators would be fighting each other.  When this was completed the second important thing to do before the battles was the probatio armorum, or inspection of arms.  They would check every sword, trident, and every bow for sharpness and straightness.  When the battles began it was normally one gladiator against another, however the sponsor or audience could request other combinations like several gladiators against each other or the could be on two separate teams.  At the end of the fight the gladiator would acknowledge defeat by raising a finger to the audience in approval whether the wounded should live or die.  The sponsor or emperor and the audience would point their thumbs in a certain way either for the m to live or die.  It is not clear which way they would point their thumbs.  In some cases the audience would be so impressed on both gladiators they would request that both live to see another day.  A gladiator who would win several fights was allowed to retire.  A retired gladiator would often go to the gladiator school and train other gladiators.
Bibliography
Baker, Alan: The Gladiator. New York: St. Martin’s Press, 2001
http://www.mmdtkw.org/ALRIAncRomUnit7Slides.html
http://www.infosources.org/what_is/Gladiator.html
Thomas Wiedemann: “Emperors and Gladiators” Routledge 1992
James: “Gladiators” part of the Encyclopaedia Romana
Violence and the Romans: The Arena Spectacles
The Revolt of Spartacus A narrative essay
Daniel P Mannix: “Those About To Die”  Ballantine Books New York 1958
Michael Grant: “Gladiators” Penguin Books London 1967 reprinted 2000 ISBN 0140299343

3 responses to “Gladiators: A Day at the Games”