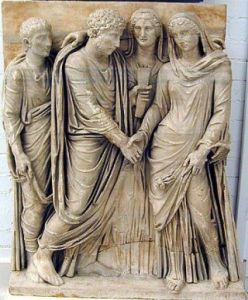 When people get married today it usually involves lots of planning and money and where the wedding is going to take place.  We never really think of is this wedding going to be legal or illegal.  This was definitely an issue during the late Republic and into the Imperial period in Rome.  Marriages required no formal ceremony to be valid.  Cohabitation between eligible partners basically created marriage.  Most historians today would agree that marriages within village or ethnic units, social classes and status groups were common in the communities that constituted Roman society   Slaves could not legally get married but all Roman citizens could whether they be freeborn or freed, could marry another Roman citizen of the opposite sex unless disqualified by not meeting certain conditions before a legal marriage could be contracted.

Both parties involved in the marriage must be adults.  There could be no marriages between children.  Both man and woman had to be unmarried and polygamy was never practiced in Rome.  The two getting married couldn’t be closely related and in general marriage was absolutely forbidden between ascendants and descendants.  If all of these conditions were met between man and woman they might legally be married.  Certain distinctions might affect the civil status of their children.  If all requirements were fulfilled and both were Roman citizens the marriage was legal and the children by birth were legitimate with all civil rights.  If one of the parties in the marriage was a Roman citizen and the other member did not have full Roman citizenship, the marriage was still legal.  The children always took the civil standing of their father.

Roman citizens then had to live up to these requirements to be classified as a legal marriage.  The Christian church era of Rome changed a few of these rules as time went on.  At least now days we don’t have to worry about some of these things but the stress is still there.