In 280 BC King Pyrrhus attacked Rome “the Romans had never seen elephants before, [and] the elephants wrecked havoc” (p. 81, Ward) on the Roman phalanx. Though Rome would eventually defeat Pyrrhus, this first taste pf pachyderm warfare was to be a good lesson for the future.

When the Punic Wars kicked off Rome was somewhat accustomed to elephants, yet the shock of Hannibal crossing the Alps with them did unhinge the first combat group to face him in Northern Italy. Hannibal’s folly at the Battle of Zama, using under trained elephants as “the battle began with the elephant charge at the center of the Roman line. Hannibal ordered the drivers of his elephants to charge the enemy but when the sound of trumpets and bugles pierced the air all around them, some of the animals panicked, turned tail and stampeded to the rear. Then finally all the beasts took fright: some of them escaped by way of gaps between the maniples through which the Romans allowed them to pass, in the end [the elephants] stampeded clean off the battlefield.” (p. 133, Kistler). After this Scipio leveled terms against Carthage to include that they could not “keep or train war elephants” (p. 134, Kistler).

Livy in History of Rome notes how Roman “legions gave [some of] the beasts to an ally in Western Turkey. [And] the elephants were immediately useful in repelling a Gallic invasion only a year later” (p. 107, Livy)(p. 146, Kistler). Other than the elephants initial training there was no indication that the peoples of Western Turkey knew how to utilize them. Good weapons to have on your side.

From 171 BC to 168 BC the Romans would use elephants to their advantage in the Macedonian Wars, in which King Persus of Greece would battle it out with Rome. The first battle Persus witnessed in horror as his cavalry horses lost their minds when faced with the opportunity to go too the horse-promise land via a ton of angry elephant, 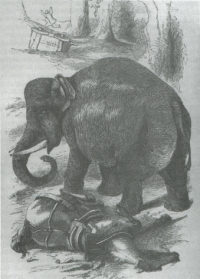 the battle was lost, in his (Persus’) retreat he came up with a plan to “train” his horses so as not to have a repeat performance. So “in order to make sure that the beasts should not prove a source of terror to the horses, he constructed images of elephants and smeared them with some kind of ointment to give them a dreadful odor. They were terrible both to see and to hear, since they were skillfully arranged to emit a roar resembling thunder; and he would repeatedly lead the horses up to these figures until they gained courage.” (p. 147, Kistler). This was to no avail for when he crossed again in battle with the Roman elephants his cavalry failed again to Persus’ undoing.

We should now turn to some common terms one sees with trained war elephants. First is the Howdah this is the wooden box that is put on the back of the elephant for men to ride in. Second is the Mahouts these are the men who control the elephants normally riding on the neck. Third is the Archers who were the most common warrior in the howdah shown in this picture.

2 responses to “Elephant, Romans and Horses.”