The youth in Rome had a variety of activities for play and for exercise.  Some of the most common included jumping, wrestling, boxing and racing.  Activities for the wealthy also included hunting and fishing.  The Romans played many hand games including one similar to ‘handball’ that we still play nowadays.  A few examples of toys include:  balls, board games, hobbyhorses (which is in the picture above), kites, tiny models of people and animals. The ancient Romans played with hoops, with pieces of metal on them, like bells, to jingle and warn people in their way. Boys walked on stilts and played games with balls. They played tic-tac-toe, and a game called “knucklebones”, which is a lot like jacks, only played with bones.  The boys played many war-type games. They played war, and fought with wooden swords. A popular games was a game called “Troy” (lusus Troiae) where a whole pack of kids outnumbering you, who’d try to drag you across a line. Gambling, board games and dice games were also activities the Romans would entertain themselves with.  The girls played with dolls that were made of wax or terracotta (shown in the picture below), sticks, bows and arrows, and yo-yos. When Greek children, especially the girls, came of age it was tradition for them to sacrifice the toys of their childhood to the gods. On the eve of their wedding, young girls, around the ripe old age of fourteen, would offer their dolls in a temple as a rite of passage into adulthood.  After this event women were no longer allowed to be involved in these activities.  Those women, who were in wealthy families, were able to throw dinner parties that could possibly have dancing, poetry readings or music as forms of entertainment.  Smaller children were able to entertain themselves with small toys or games such as leapfrog. 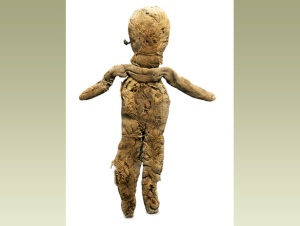