The Roman Theatre was influenced by three different things these were “Greek Drama, Etruscan (circus-like elements) and Fabula Atellana (Atellan farces: Atella was near Naples)” (p.2, Trumbull). The “actors/performers were called histriones” (p.2, Trumbull). The plays were performed during the day, around lunch. “The characters wore Greek dress, with or without masks. Paint and wigs were employed, a gray wig for an old man, black for a young man, and red for a slave” (p.1, Bellinger).

The slave was a staple in most plays; both Terence and Plautus used them extensively. In Plautus’s play “Pseudolus,” the slave owner Ballio shows how slaves were treated, as noted in this seen “Ballio: You who’s got the ax, look after chopping the wood. Slave: But the ax’s edge is blunted. Ballio: Well; be it so! And so are you blunted with stripes, but is that any reason why you shouldn’t work for me?” (p.1, Davis).

The early Roman theaters “were built of wood at the foot of a grass-covered slope, the stage was a narrow platform, elevated, and backed by a simple architectural design. There was no curtain, no scenery that could be changed, no sounding board to carry the voice. An altar was placed on the stage, in front of the set. The audience [would] either reclined, stood, or sat on stools brought from home” (p.1, Bellinger). As time went on theaters started to refine, Pompey the Great “erected the first permanent theater in Rome. It was of stone, seated perhaps seventeen thousand people [it] was situated on the Campus Martius on level ground, and had separate sections for knights and senators” (p.2, Bellinger). 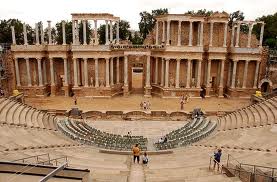 Though there have been advancements in the comfortably of where one sees plays, we still enjoy the same basics that the ancient world did, from actors and costumes to “good” written shows.

1: Bellinger, Martha. “What the Roman Play was like” A Short History of Drama (1927): 1-2. http:www.thetheatrehistory.com/ancient/bellinger002.html.

One response to “Roman Theatre”