Who Were the Vestal Virgins?

The earliest mention of the Vestal Virgins is associated with the Romulus and Remus myth, when their Mother was made a Vestal by her Uncle.  It was supposed to have been an honor, but in truth it was a means of depriving her from ever having children. (Livy, Book 1. 3.11)  In reality the Vestals played an important part in Roman public life.  Tradition has it that the Vestals Virgins were instituted by King Numa.  Both Livy and Plutarch write of his role in the Vestals lives and the roles that they played.  But who were these women?   With their number fixed at six, they were appointed between the ages of six and ten, and had to be daughters of respectable citizens, frequently were the daughters of Italian nobles.  When a vacancy occurred, twenty girls would present themselves to the Pontifex Maximus, head Priest over the Vestal Virgins, who would, chose one from amongst the candidates.  She would then serve for thirty years.   “During the first decade they were to learn their duties, during the second to perform their duties they had learned, and during the third to teach others these duties.” (Plutarch, 10.1-3)  After their thirty years, they were free to chose a new life, even marry if they wanted.  Most Vestals chose not to leave and seek a new life once their service was over.  During their thirty years they lived in the spacious atrium Vasae at the east end of the Forum. (See inserted photo below)  “Their duties were: to keep the sacred fire burning in the adjacent round temple of Vesta (they took turns watching it), to keep the temple clean, sprinkling it with water that they fetched themselves, to sacrifice daily at the sacred hearth, and to take part in various religious ceremonies about the city.  Wills and treaties might be entrusted to them for safe keeping.” (Cadoux)  King Numa bestowed great privledges upon the Vestals.  In exchange for remaining chaste and pure, they were assigned a stipend fro the public treasury, they had the right to own property, make a will during the lifetime of their fathers, transact and manage other affairs without a guardian.  While out performing their duties in the cities, if they happened upon a criminal on his way to his execution, she could pardon him.  But these had to chance meetings and not prearranged. 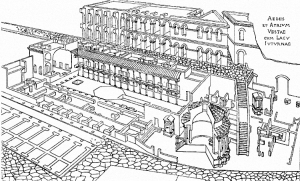 A reconstruction of the House of the Vestals by Christian Huelsen (1905). Photo Courtesy of en.wikipedia.org/wiki/Vestal_virgins.

Next to the Vasae was the round temple, where the sacred fire burned.  This fire was renewed annually on 1 March, the original New Year’s Day in Rome.  “This fire was a pure fire and might not be fed with wood from dead trees, nor might any rubbish be thrown upon it, or any impious act done in its presence.  If the Vestal Virgins allowed the fire to go out, they had to make anew one by drilling a hole in a board of ‘lucky wood,’ until a flame was produced by friction. The fire was then carried into the temple in a bronze sieve and the defaulting priestesses were whipped.  Since the temple guarded the nameless ancestors upon whose power rested the power of Rome itself, along with all things related to the prosperity of Rome,” punishments for even minor infractions were swiftly dealt out. (Prowse)  For minor offenses, the virgins were punished with whippings upon her bare back.  The most grievous infraction was giving up her virginity/chastity, for this she was condemned to being buried alive in a small chamber near the Colline Gate.  “From Tarquin to 113 B.C. eleven instances of executions of unchaste Vestals were recorded, and two more again in 76.  In only a few cases were the executions of their paramours mentioned.” (Cadoux).  The Vestal Virgins remained until the Emperor Theodosius in 394, when he ordered them disbanded and the fire extinguished.

“A reconstruction of the House of the Vestals by Christian Huelsen (1905).”

3 responses to “Who Were the Vestal Virgins?”