When most people hear about the Romans, they think of grand achievements like the Coliseum or the Pantheon, which are very large and ornate. But they are rather small when compared to the vast stretching aqueducts. The aqueducts not only brought enormous amounts of water into Rome, but were also used to flush the waste water and sewage out of Rome, simply by using gravity. 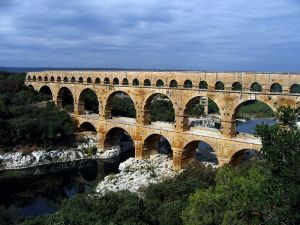 Most of the water in Rome ran under the city. Tunneling through two hundred and sixty miles of rock, and around thirty miles of crossways and bridges. Relying on gravity for a continuous flow, the water was drained into large cisterns in the city, where it was then distributed throughout the city using lead pipes. (Rome.info)

Instead of using geography to accomplish all of the gravity needed to bring large amounts of water to the cisterns, the Romans built the large bridges and arches when hills were not present. By doing this, the aqueduct would not interfere with roads or buildings, the aqueduct was simply built over them. But a majority of the aqueducts were not visible. Most of them were underground, tunneled through the hard bedrock at a slight grade in order to manipulate gravity, in order to have a never ending flow of water to the every thirsty cities. When there were no other ways of keeping the water flowing, the Romans would use a siphon technique. Siphons are complicated because they used the weight and pressure of the flowing water to push the water up hill. Any weak point or breech in the pressurized pipes and tunnels would cause the entire system to fail, so this technique was used sparingly. (Hansen) 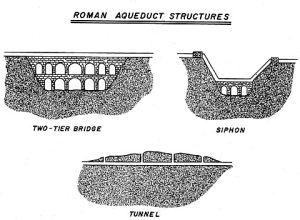 Although large amounts of water were carried to Rome everyday, only the rich population had direct access to it by diverting (stealing) it, although it rarely flowed any higher than the lower level. Most of the population accessed the water by a constant flowing public fountain. (Gill)

Filed under The Roman World